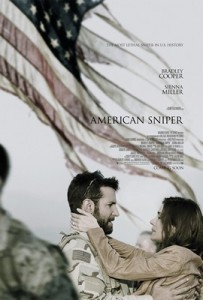 Story
From the memoirs of Chris Kyle (Bradley Cooper) who chalked up 255 shootings while working for the United States Navy SEAL is the most feared sniper ever to be documented. His motivation begins after watching a televised coverage on the 1998 U.S. embassy bombings. During a night out, he meets Taya Studebaker (Sienna Miller) and they soon wed. When the sudden attacks on September 11 2001 hit American soil, Kyle is deployed to Iraq. He has been returning to the Iraq War for a total of four tours but in each tour, he finds it increasingly trying in readjusting back to life within the community which continues to keep him mentally distant from his family.

Review
Advancing silently undetected and hitting the bull’s-eye, ‘American Sniper’ swoops in and makes a killing for an enormous chunk of the box office pie in its first week of wide release ($89.2 million over a 3-day period) and scoring six Oscar nods including ‘Best Picture’ and ‘Best Actor’. Outpacing actual tentpoles, the war drama has set several January milestones and in less than two months, it surpassed ‘The Hunger Games: Mockingjay – Part 1’ as the top dog for 2014 stateside.

So what is the secret of a real-life hero muscling his way into superherodom? A native of Odessa, Texas, Kyle’s virtues are governed by his father’s firm moral code to protect the sheep from the wolves and holding on to this philosophy fuels his burning desire in glorifying, I mean, eradicating the acts of terror. With 160 kills legitimately verified by the Department of Defence, Kyle is the sheepdog he so loyally mimics to serve and protect.

If not marred by a serious arm injury, the States’ deadliest marksman in military history may still be alive, living out as a professional bronco rodeo rider working on a ranch with wife, Studebaker. The writing of her character comes off tritely bland and needy but Miller charges ahead with respectability, grace and pathos in a minor role as the woman who is desperately trying to keep her loneliness and husband’s emotional state (sanity) in check.

Ultimately, it is Cooper whose dynamism and versatility deserves the highest praise for imbuing Kyle with dollops of masculinity yet the mental agony and deterioration on display after each tour are encapsulated intensely by the four-time nominee. Mission after mission, he is always clearheaded and cool as a cucumber when taking out his targets although it still rattles him if the mark concerned is a kid with an extreme imagination where firearms are so easily available.

A fact that director Clint Eastwood shrewdly capitalises on. It is the film’s most engaging section in the sometimes confusing and plodding narrative. War is bad, we get it. Somehow, I cannot help but notice that the rest of the movie feels like a bias description of the truth (again). I am all for world peace. If branding an entire nation as overt baddies, traitors, cowards or brainwashed savages is the way to go, then I want no part of it.

Rating
Entirety: B
Acting: A
Plot: B

Rated R for strong and disturbing war violence, and language throughout including some sexual references