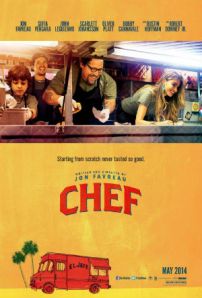 Story
The story unfolds in a Los Angeles restaurant where Carl Casper (Jon Favreau) gets an opportunity to impress revered food critic, Ramsey Michel (Oliver Platt) in a new tasting menu but is disapproved by his employer, Riva (Dustin Hoffman) who requests that he stick to the restaurant’s best sellers. The chef is reviewed unfavourably and retorts via ‘Twitter’, unbeknownst the reply can be viewed publicly. The blogger returns to the diner hoping for Casper to refute his criticism with original creations but is openly humiliated instead. After the meltdown, Casper resigns and decides to start his own food business in a food truck with the encouragement from his ex-wife Inez (Sofia Vergara). It gives him a chance to not only mend the ties between him and his neglected son (Emjay Anthony) but also as a channel for him to realise his desire is not merely a career devoid of any pleasure.

Review
Never a dull moment when food, family and friendship are the main ingredients for a savoury and delectable romp that is cooked to perfect comic timing. While the supply is not as commercially available as its other financially-proven stablemates, this indie darling stacks pretty high up with its mainstream accompaniment such as the Oscar-nominated ‘Chocolat’, ‘Julie & Julia’ and ‘Ratatouille’. As with all releases, do expect feeling warm and fuzzy upon completion.

‘Chef’ serves as an allegory to Favreau working on smaller scale projects after undertaking Hollywood behemoths starting with the whopping success of ‘Iron Man’ to the box office misfire of ‘Cowboy & Aliens’, paralleling to his fictional character quitting in a luxurious eatery for a mobile dining experience. Instead of featuring French delicacies as the main course, this road trip movie takes a Latin American route spiced up with a hot Cuban flavour.

Midway through, those mouth-watering Cubanos, a staple in Miami make their unprecedented appearance, the dour mood is flipped immediately and Casper’s journey to rediscover his passion through the reconnection with his estranged family closes on a high note. Favreau who wrote, directed and produced besides starring in this comedy has concocted an intelligent mix of believable dialogue, worthy performances from the well-rounded cast and forbearing the swelling sentimentality.

Normally, it would be prevalent in a feel-gooder like this one but Casper keeps its truck wheels firmly planted on the road via uncompromising integrity and undying love for the culinary arts. Favreau whose supporting turns have always been the comic relief is in great form as the man who has loss his sense of purpose and the determination to return on top is fiercely captured by the hulking figure he possesses yet it does not overwhelm the rest of the picture’s dynamics.

He shares the limelight from newcomer Anthony who manages to hold his own despite being surrounded with some acting heavyweights. His maturity is visibly potent and is a spirited force to be reckoned with. The father and son bond is further fortified through bubbly and infectious vibes emitting from Vergara and John Leguizamo. Also worth a mention is Robert Downey, Jr. as a hygiene freak so forthcoming and outspoken that he single-handedly outwits every one of his colleagues.

But its juiciest bits are often saved for one of these reasons: as a means to shock the bejesus out of you or as a morale booster when the going gets tough. I would go with the latter and hopefully not to give too much away, it involves ‘Twitter’, a whole lot of swearing and Platt. A cool way to connect with the under 25s and even more effective for ‘twitting’ to be a global pastime than it already is. While this may not be life changing, the chance for a molten chocolate lava cake tantalising before your very eyes should at least whet those taste buds.

Rating
Entirety: A-
Acting: A
Plot: B+

Rated R for language, including some suggestive references